This past week, a client asked me to translate a Yiddish journal written in Hungary from the 1840s. The journal turned out not to be written in Yiddish, but in German in Hebrew characters. 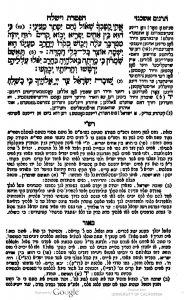 Moses Mendelssohn was famous for doing this in the late 1700s with his German Bible translation in Hebrew letters. In the image at right, Mendelssohn’s German translation appears under the header “Targum Ashkenaz.” This is also known as Judeo-German. Yiddish speakers today, trained at YIVO, often cry “Daytshmerish!” when they hear Germanized Yiddish, or the use of an out-of-bounds German word. This distinction between “daytshmerish” and “correct” Yiddish usage came out of early twentieth-century Jewish nationalist politics and the desire to create a respectable, self-aware Yiddish language out of the shadow of its German father. Employing the term “daytshmerish” signals that a person should use a word with a Hebrew or Slavic root instead. (In the Chassidic community today, such distinctions are not made, and their Yiddish does have more similarities to German than YIVO klal Yiddish.) But this distinction between a German-infused Yiddish (daytshmerish) and standard Yiddish is simply a question of word choice. There are other factors involved than simply word choice when it comes to true German written in Hebrew chracters. Knowing the difference between Judeo-German and Yiddish can also better refine answers to the question, what is the difference between German and Yiddish?

How can you tell the difference between German in Hebrew characters and Yiddish? 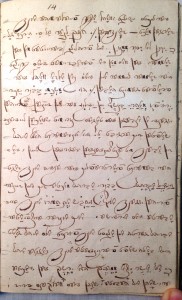 I have included a sample from the journal that I am translating at left to showcase the original handwritten style. (At the end of this article, I have provided a transcription of the handwritten Yiddish sample along with English and German translations.) This is a commentary on the Torah, and so at first it was difficult to tell that it was not really Yiddish, since it started by quoting the Hebrew verse under discussion. But as I began translating, it became clear that this was German and not Yiddish. Here are some of the indicators:

When a Jewish writer of German wanted to distinguish his writing from Yiddish, he avoided any Hebraicisms to stick to only the German elements of Yiddish. At no time does the author use a Hebrew word (which Yiddish commonly does), except when referencing a word in the original verse from the Torah. In this sample for example, the author even ended his Torah commentary with the word, “Amen,” but chose to spell it according to this four-letter Latinized spelling, rather than the Hebrew three-letter word. Thus he wrote: אמען instead of אמן. This signals to the reader that author is not writing Hebrew or Yiddish, but German.

The verb order and word choice between German and Yiddish is different. Among the Germanic languages, German is one of the languages that places verbs at the end of subordinate clauses (VF) rather than in second position (V2). English and Yiddish, as two other example Germanic languages, regularly keep the verb towards the beginning of the sentence, usually in the second position (SVO). Ex. “I don’t know, why I like to eat broccoli.” In both clauses here, the verbs “do” and “like” are toward the beginning of their respective clauses. This verb order holds true for Yiddish as well: “Ikh veys nisht, far vos ikh hob brokoli azoy lib” (איך װײס נישט, פֿאַר װאָס איך האָב בראַקאַלי אַזױ ליב). But in German, the verbs in the second clause here get bunted to the end, so that it reads: “I don’t know, why I broccoli to eat like” (Ich weiß nicht, warum ich Brokkoli gern esse). 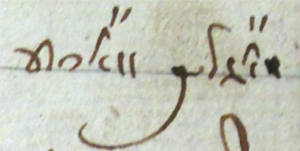 “möglich wäre” (would be possible) written in Hebrew letters

This is pretty much a dead giveaway that a text is German and not Yiddish. I am not sure how common this is, as this was the first handwritten sample of this that I had seen, but this writer included an umlaut over an aleph to symbolize the German letters ö and ä. Two examples of this are found next to each other: The umlaut ends up looking like quotation marks (or double apostrophes). Here, the author writes the German möglich wäre (would be possible) in Hebrew letters, and twice uses an umlaut above the aleph to symbolize the ö and ä in those words. In contrast, Moses Mendelssohn’s German translation of the Bible did not do this.

Transcription of the Handwritten Judeo-German Sample Above

(I hope the various browsers show the Hebrew characters correctly.)

As always, an experienced Yiddish translator can provide a professional translation. Let my polyglot expertise help you in translating your family’s documents–Yiddish, German or Hebrew. Please contact me for a translation inquiry, or leave a comment below about information on this page.