Things you thought were Jewish

Latkes, groggers, and braided challah, what could be more Jewish than that? Get ready to have your mind blown.

When I was an exchange student in Germany living with a host family, I was honestly shocked to have latkes served to me one day for dinner. Not only was I served latkes, but they were served with applesauce. My German-Polish host mother had never heard of latkes, and she just called them Kartoffelpuffer. For her, it was just dinner. Even worse, years later I was walking through one of the many Christmas Markets in Berlin and saw a stand for these Kartoffelpuffer. There they had two options for toppings–sour cream or applesauce. At a Christmas Market! That’s when I knew that the Jews just took this idea for themselves at the closest holiday, Channukah. 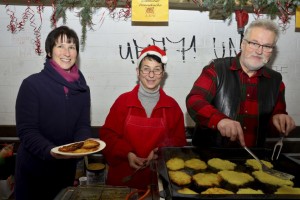 My über-Austrian friend was going over her village’s Easter traditions and told me that the week before Easter, one of the activities is that the children go around making noise with their wooden Ratschen, and the adults give them money. Now, a noisemaking device in and of itself wouldn’t be that surprising in another culture, except this wooden noisemaker is used at the same time of year as Purim (Easter’s in the springtime), as part of their religious festivities. 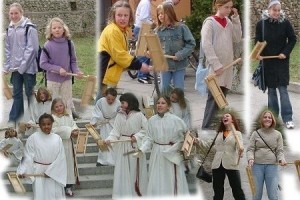 Another German friend was talking to me about the Kosher-style bakery in town and how she loves the challah. It reminded her of the Osterbrot they had for Easter. As she was explaining to me about braided Osterbrot, I looked it up online and there are different types, including a variant of our egg challah and a circular sweet bread with raisins (think Rosh Hashanah!). Again, braided bread by itself wouldn’t be so special, but it’s the association specifically with a religious holiday that leads me to believe that the Jews have just made it their own. Various names for this challah: Osterzopf, Osterbrot, Osterpinze. Challah with Easter eggs, anyone?

On Purim, my kids in their costumes are going to start walking around threatening the neighbors if they don’t give them candy.

For Lag B’Omer, let’s add fireworks to the bonfire celebrations.

On Simchas Torah, we’ll take the drinking festivities onto the rooftops and throw beads.

And for Channukah, we’ll start giving each other lots of presents. (Whoops…)

Avraham
How Yankel got his shtetl liquor license